Upgrading for Finals: How Common Is It?

Upgrading for Finals: How Common Is It?

Gymnastics fans love to debate the strategic merit of adding upgrades to a routine. How fierce is the competition? How consistent is the skill? When is it worth the risk? And the most tantalizing scenario is one in which a gymnast who played it safe during qualifications decides to go all-out for the finals, risking a fall for the extra few tenths in difficulty that could end up making all the difference. How common is this? I turned to the data to find out.

There’s an important reason to talk about this now: Baku. The 2020 Baku World Cup ended in a state of limbo: between qualifications and finals, the Azerbaijani government banned all sporting events in response to COVID-19, so finals never took place. A few weeks later, the FIG announced that scores from the qualification round of the 2020 Baku World Cup would be treated as the final results. The prize money, the medals, the glory, and — most importantly — the Olympic qualification points have been awarded on the basis of qualification scores. Gymnasts like Vanessa Ferrari and Emma Spence are sort of screwed by this decision.

A lot of questions can’t be answered fairly during a global pandemic, and “What to do about the aborted Baku World Cup?” is probably one of them. But the decision to treat qualification results as final struck many as particularly unfair because of gymnasts’ tendency to upgrade for finals. Gymnasts picked their qualification routines under the assumption that those routines would not determine their final placement, so the qualifications results don’t reflect a fair ranking of each gymnast putting her best foot forward. Given the chance to upgrade for finals, we might have a different set of athletes going to Tokyo 2021.

This context lends extra weight to the question: how often do gymnasts really upgrade for finals? I pulled data from the last five event world cups, and compared the difficulty scores that gymnasts got during qualifications and finals to determine which routines were upgraded. Of course, d-scores don’t perfectly measure intentional, strategic changes in routine composition: sometimes a d-score goes up because a gymnast got her double turn around a little further, or got her hips a little closer to a laid-out position. In other words, we don’t know if a higher d-score represents strategy or better execution. But it’s the best information we have.

Here are the main results: 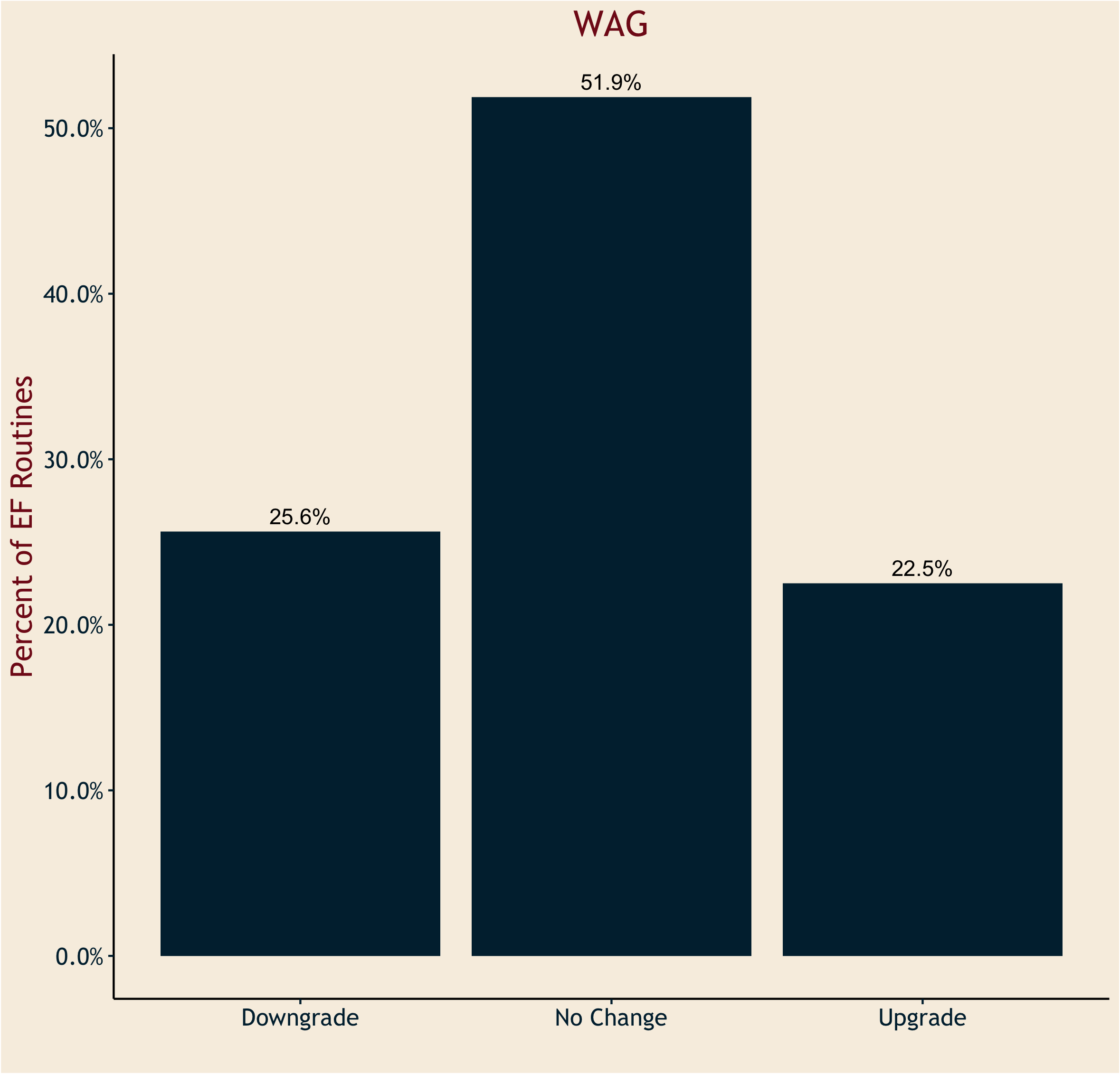 In these five world cups, 22.5% of the routines performed during women’s event finals were more difficult than that gymnast’s qualifying routine. That suggests a lot of upgrades — or much higher levels of performance that cause way more skills to be credited. The average routine only increased in difficulty by 0.003 points between qualifications and finals, but 14.3% of routines increased in difficulty by more than 0.2 -- which can make a big difference.

I also ran the the same numbers for the men’s competition. For men, 30% of the routines in event finals were more difficult. The average MAG routine increased in difficulty by 0.02 points, but a full 22.5% of routines increased in difficulty by more than 0.2. I’m not surprised that it’s way more common for men to upgrade: there’s more of a culture of “chuck it and see what happens” in MAG. 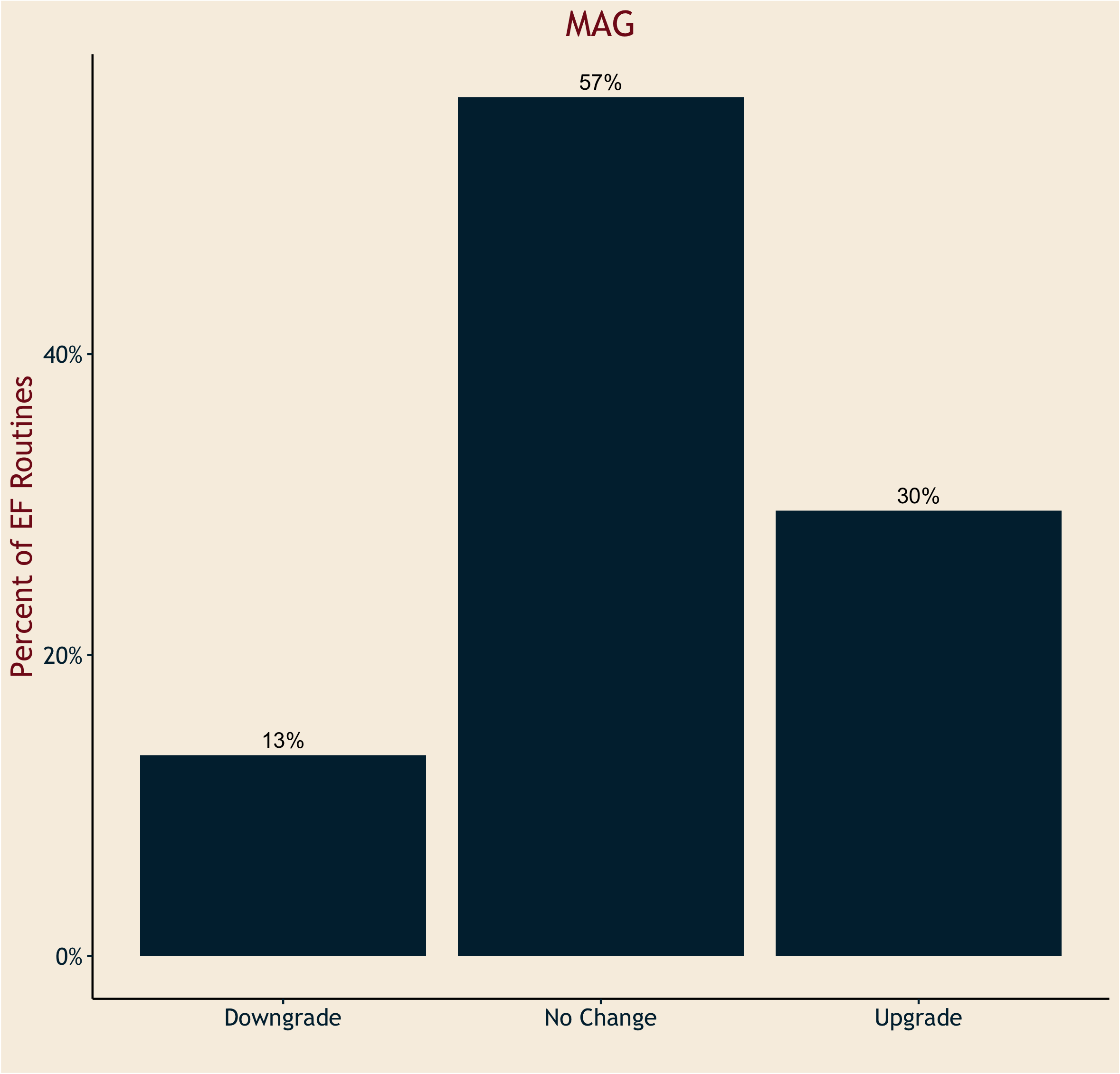 The share of downgraded routines for both genders is quite surprising. You never hear talk of gymnasts intentionally playing it safe during event finals, so it’s likely the case that most of these “downgrades" occur due to poor execution: gymnasts don’t get credit for all their attempted turns, connections, twists, or body positions. To understand this a little better, I broke down the results by event. 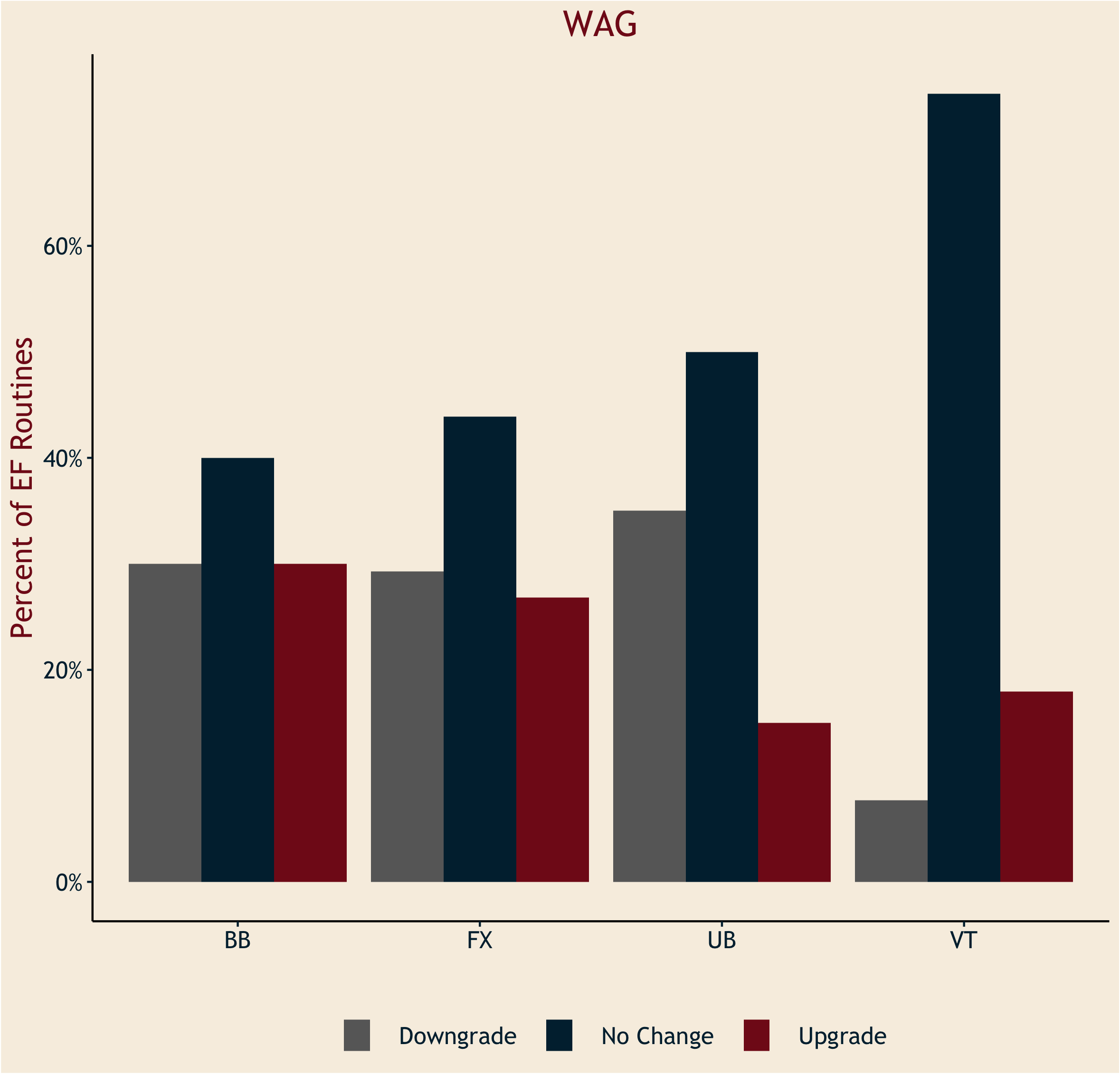 First, both upgrades and downgrades are way less common on vault — you can always count on Maria Paseka to whip out something crazy for finals, but she’s the exception rather than the rule. Upgrades are also less common on bars. To my mind, there’s fewer unintentional upgrades on bars and vault — there are no turns, fewer ambiguous body positions, no questionable connections, etc. This suggests that a lot of the increase in d-scores is just a result of better execution rather than strategic decision-making. 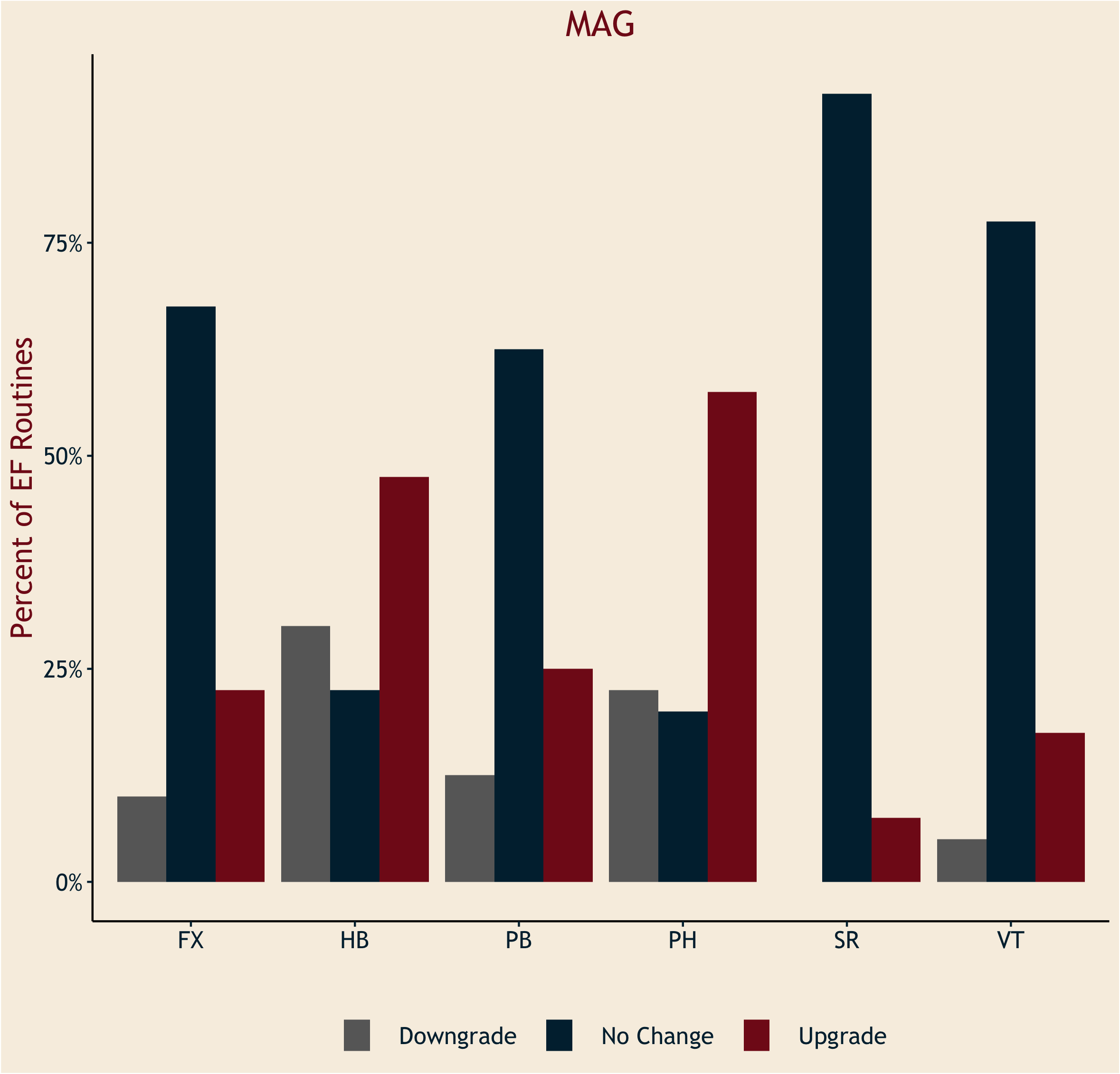 For men, we see the most upgrades on pommel horse and high bar. I don’t follow MAG so closely, but this result tallies with my impression of where and when we hear gymnasts talk about planned upgrades. The level of consistency on still rings is astonishing. Could that event get any more boring? (*ducks*)

In summary, we see a lot of cases where gymnasts perform a higher difficulty routine during event finals. If the gymnasts that qualified to finals in Baku would have upgrade their routine more than a fifth of the time, then it’s absolutely absurd to treat qualifications results as finals. However, we can’t be sure if all the upgrades in the data are due to strategy or simply better execution. There’s only one way to know for sure which gymnasts truly plan to upgrade for finals: ask them.

How Much Better are the World Cups?